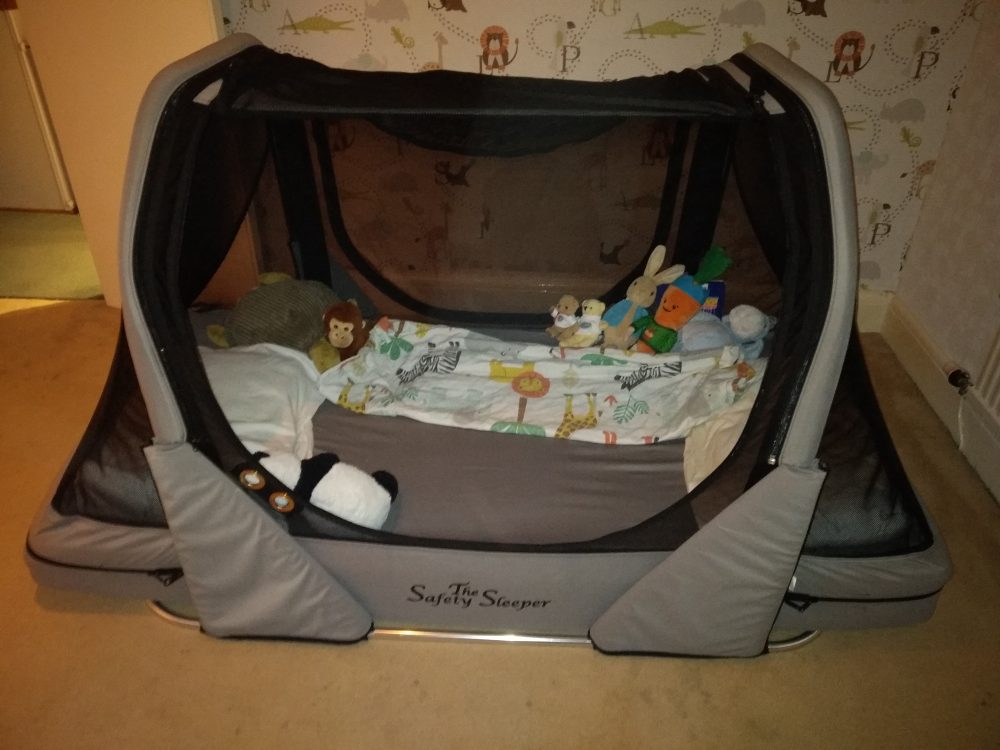 From the very first night this bed changed the course of our family life.  We have gone from over three months of getting up at 3am with our son, which had to us being beyond exhausted, to getting up between 6 and 7am and some days having to wake him up, and being able to go to sleep at night knowing our son would be safe until the morning.  Within 3 days of the trial we had made up our mind to buy one, and have not looked back since.  Was easy to set up, packs up into a suitcase for travel, and is solidly built but also extremely well padded inside and out, a really well thought out design.

Our son Harry (4), has a genetic condition called Smith-Magenis syndrome, which amongst other complications manifests itself in Harry’s sleep patterns, as his circadian rhythm is inverted, meaning that night time feels like day and day time feels like night time for him.  While Harry slept in a cot this was fine, as he would wake somewhere between midnight and 3am every morning, but as he could not go anywhere would self soothe and go back to sleep.

Once he outgrew the cot and moved into a bed, the family’s problems with sleep really began, as we found that when Harry woke in the early hours now he would get out of bed and wander around his room, and be quite vocal and excitable.  Occasionally we could get him back to sleep but invariably it would end up with either myself or my wife taking turns getting up with Harry at around 3am every day, not mean feat when we both work full time jobs.

This went on for 3 months prior to entering and winning the draw for the safety sleeper trial, and to be quite frank we were both exhausted to the point where doing our jobs was becoming difficult, and beyond Harry going to nursery in the week we had no respite due to the Covid restrictions.

We were at our wits end but thankfully the Smith Magenis Syndrome Foundation sees this with the families affected by the syndrome, and offered advice and support, and also let us know that we could enter a prize draw for a trial of the safety sleeper, which was ran jointly by the Smith Magenis Syndrome Foundation and Murray’s medical, and we were fortunate enough to be one of the names drawn on the facebook live draw.

After a few congratulatory emails we received a phone call from our regional rep Matty who arranged a delivery date and time for the safety sleeper.

When he arrived Matty was resplendent in gloves and a mask for Covid safety, after bringing the travel case with the bed inside up to our son’s bedroom I set about assembling the safety sleeper under Mattys instruction, which was easy to follow and was fully assembled in less than 10 minutes.  The bed is very solidly built and will last him a good number of years, yet every part of it has been well thought out with padding and covers for zips so that from inside there is nothing that the Harry could either bump his head on, or scratch himself on something sharp or hard.

The bed comes with its own inflatable mattress for use when travelling, and packs down into a standard sized suitcase on wheels.  It comes with a spare bed sheet to go over the mattress to allow rotation for washing and drying, which can be changed easily without having to dismantle the whole bed.  We added our own mattress to the bed, added his bedding and his favourite teddy bears and waited for Harry to come home from Nursery.

After his tea we went up to his room after telling him we had a surprise for him, and his little face lit up when he saw what to him looked like a new den in his bedroom. He dived straight in and set about exploring, and to be honest we have not looked back from that moment.

Once he had been bathed and had his favourite stories read to him, we dimmed the lights and waited until he fell asleep and then quietly zipped up the side netting and left him for the night.

We went to bed a few hours later, fully expecting to be up at the usual 3am, but to our surprise we woke at 6am and he was still asleep, and woke on his own a short while later.

With the exception of 2 mornings he has been waking up between 5.30 and 7am, which has restored the energy levels of all three of us, and has even meant we have had to go back to setting an alarm on workdays.

While Harry does still wake briefly in the night, as he did when he was in his cot he will play in the dark with his teddys for a short while and then go back to sleep on his own.

We didn’t have to think twice about placing an order to buy one of the beds, and thankfully we were able to purchase one before the trial bed went back, so as to avoid any meltdowns from having the bed taken away from him.  I can safely say that they are worth every penny, and cannot thank Murrays medical and the Smith Magenis Syndrome Foundation for giving us this opportunity.

Knowing that he isn’t wandering around his room and is safe and sound in his bed has been such a weight off our minds, and being able to get a full nights sleep has given us back our life and sanity.

One Winner Chosen Every Month!

also receive 10% OFF your first order!!

We use cookies to ensure that we give you the best experience on our website. If you continue to use this site we will assume that you are happy with it.OkPrivacy policy